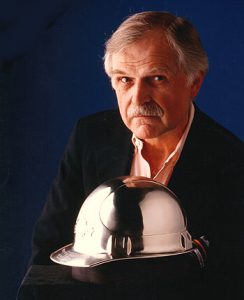 William Frederick passed away on May 11, 2012. In 1946, Frederick began pursuing his BFA and MFA degrees in Art from The School of Art Institute of Chicago, where he subsequently taught for six years. He was a member of the Arts Club of Chicago and a member of Society of American Silversmiths. Among his many diverse projects as a silversmith are some 400 or more chalices that he created, never repeating a design. Consistent and distinctive in his designs is the use of the hammered surface; Frederick preferred the textured instead of the smooth, polished surface. His long career was sustained by word of mouth and the reception of many awards and articles in trade publications. Notable was the support afforded by his life partner of more than fifty years, the noted artist Ralph Arnold, who preceded him in death. Frederick’s creative importance is recognized by many clients, collectors, colleagues, and friends. His work is in several museums including the Art Institute of Chicago.