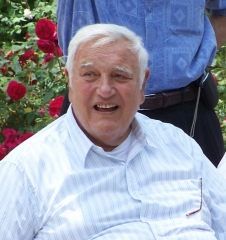 William Gasparrini passed away January 6, 2012. He was the owner of Post Road Iron Works in Greenwich, CT. He was active in the National Ornamental and Miscellaneous Metals Association and the Artist Blacksmith Association of North America, and was a founding member of The Metal Museum. He was secretary-treasurer of ABANA from 1975-1980 and a prominent member of NOMMA for many years serving as president, vice president, treasurer and member of the board of directors. Among the many awards he received from NOMMA, he was given the Distinguished Service Award, the President’s Award, and the Julius Blum Award in 1980, which honors the person who has done the most for the iron works industry in the United States during that current year.