Variations on a Theme

Annually, each member of the American Jewelry Design Council (AJDC) creates a Design Project where each designer interprets a single concept or theme. The final product is a collection of unique jewelry pieces joined by a solitary concept. On view in this exhibition is a selection of Design Projects from the very first, in 1996 to the most recent, in 2013. SNAG is a sponsor of this exhibition. 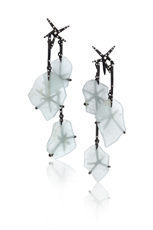 The AJDC is a non-profit educational corporation who endeavor to educate and promote the awareness of jewelry as an art. The Council was formed in 1988 by Henry Dunay, Jill Canaparo, Ron Hartgrove, Whitney Boin, Marty Gruber, Michael Bondanza, Michael Good, and Jose Hess.

In the late eighties, American jewelry designers were not highly regarded. Most people felt that only European designers knew how to design original jewelry and American manufacturers copied the Europeans’ designs. A group of American designers got together and discussed the need to educate the trade and public about American jewelry design not for commercial reasons but for the love of jewelry as art. In general, American designers had not followed the same schooling and a classic apprenticeship as the European tradition demanded but were self-taught. Even so, there were many talented American jeweler designers creating original designs that went unrecognized.

The goal of the AJDC was to gain recognition for American design talent. AJDC members were to become mentors to new designers, selecting only designers of original and distinctive work through a screening process. Integrity of design is a guiding force for the group and the AJDC does not bend its’ principles for commercial purposes.

Through the past several decades the group has evolved but the principles and ideals are the same. The mission of the AJDC is carried out through committees and an executive board to promote jewelry awareness through competitions, education and awards.