June Schwarcz died at her home in Sausalito, CA on August 2, 2015. She was 97. Schwarcz was among the most innovative and highly respected artists working in the late 20th-century enamels field. Best known for her electroformed metal sculpture, embellished with rich enamel color, she produced an extensive body of work which, while referring to time-honored vessel making traditions, defy convention.

Recognized early on for her innovative approach to the medium, she was included in 1956 in Craftsmanship in a Changing World, the inaugural exhibition at the Museum of Contemporary Crafts, New York (now the Museum of Arts and Design); that museum’s 1959 exhibition Enamels; and the traveling exhibition Objects: U.S.A. in 1969. She was designated a California Living Treasure in 1985. 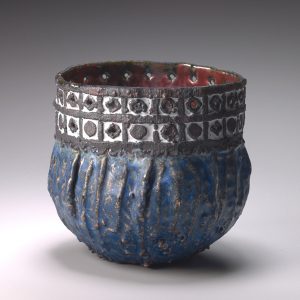 She was a founding member of the Northern California Enamels Guild, a member of the Enamelist Society where in 1991 she was given a Lifetime Achievement Award, and in 2009 she was given the Masters of the Medium Award by the James Renwick Alliance of the Smithsonian American Art Museum. Schwarcz was also a long-time member of SNAG.

In 2009 her work was featured in Transformed by Fire: June Schwarcz Enameled Vessels at the Mingei Museum, San Diego.

Examples of her work are in the collections of numerous institutions including the Metropolitan Museum of Art, New York; the Museum of Fine Arts, Boston; the Smithsonian American Art Museum; the Fine Arts Museums of San Francisco and many others.

These are just some of June Schwarcz’s accomplishments. Much more about her can be found in the obituary published in the San Francisco Chronicle.  Also see Mike Holmes’ article on the Art Jewelry Forum website.