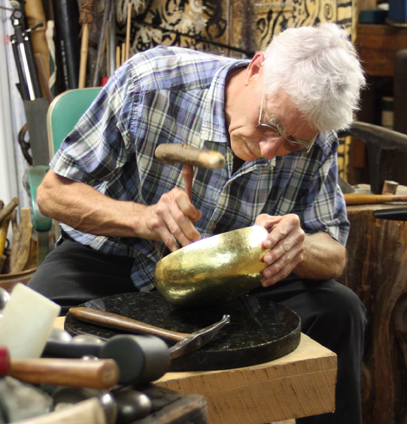 Born in August 1943, Gary Lee Noffke grew up in the small town of Sullivan, IL. He received a Bachelor’s (1965) and Master’s degree (1966) in Education from Eastern Illinois University.

While he initially studied painting, he shifted his focus to metal, earning a Master’s of Fine Arts in metalworking from Southern Illinois University at Carbondale in 1969. Studying under Brent Kington, Noffke was influenced by abstract expressionism, attacking the surface of his metal objects with obsessive and intricate detail consisting of stars, letterforms, arrows, crosses, dollar signs, eyes, and other significant symbols. 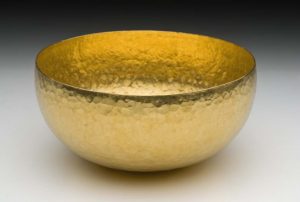 Known for his versatility, technical prowess, and originality, Noffke is a blacksmith, coppersmith, silversmith, goldsmith, and toolmaker. He has produced gold and silver hollowware, cutlery, jewelry, and forged steelware. Noffke is noted for his technical versatility, his pioneering research into hot forging, the introduction of new alloys, and his ability to both build on and challenge traditional techniques. He has been called the metalsmith’s metalsmith, a pacesetter, and a maverick.

In 1971, he accepted a position at the University of Georgia (UGA) in Athens. Noffke devoted himself to the development of UGA’s jewelry and metals program and helped launch the Jewelry and Metals Studies Abroad curriculum in Cortona, Italy. As an educator he has mentored an entire generation of metalsmiths. Today he is retired from formal teaching and lives and works at his studio in Farmington, Georgia.

During the course of his career Noffke received numerous awards and honors. In 2005, Noffke was selected as one of the Fifty Outstanding Alumni of Fifty Years of Graduate Education by Eastern Illinois University. In 2001, he was elected to the College of Fellows by the American Craft Council; in 1990, he was honored with  an NEA Visual Artist Fellowship in Craft,; and in 1988, he became Master Metalsmith of the Year, a distinction awarded by the National Ornamental Metal Museum in Memphis, TN.

From April to September 2011, the Mint Museum in Charlotte, NC, presented a major retrospective of his work, Attitude and Alchemy: The Metalwork of Gary Lee Noffke. This exhibition was the first major museum-organized project about Noffke  and featured over 120 pieces of his oeuvre, including silver and gold hollowware, flatware, jewelry, and objects forged in steel.

“Gary Noffke’s contributions to the field of metalsmithing are undeniable: from his commitment to the rich historical traditions of his craft, to his maverick nature, he has consistently mined the possibilities presented by the creation of hollowware, jewelry and flatware with his own brand of irreverent virtuosity. His dedication to smithing, teaching, and research have inspired generations of metalsmiths and introduced us all to the potential of hot-forging silver and gold.” –2016 Lifetime Achievement Award Committee: Lola Brooks, Kim Cridler, and Bruce Pepich

The 2016 SNAGneXt conference will be dedicated to Gary and he will receive his award during the Opening Remarks in Asheville, NC on May 19, 2016.