Order your SNAG swag for the holidays! 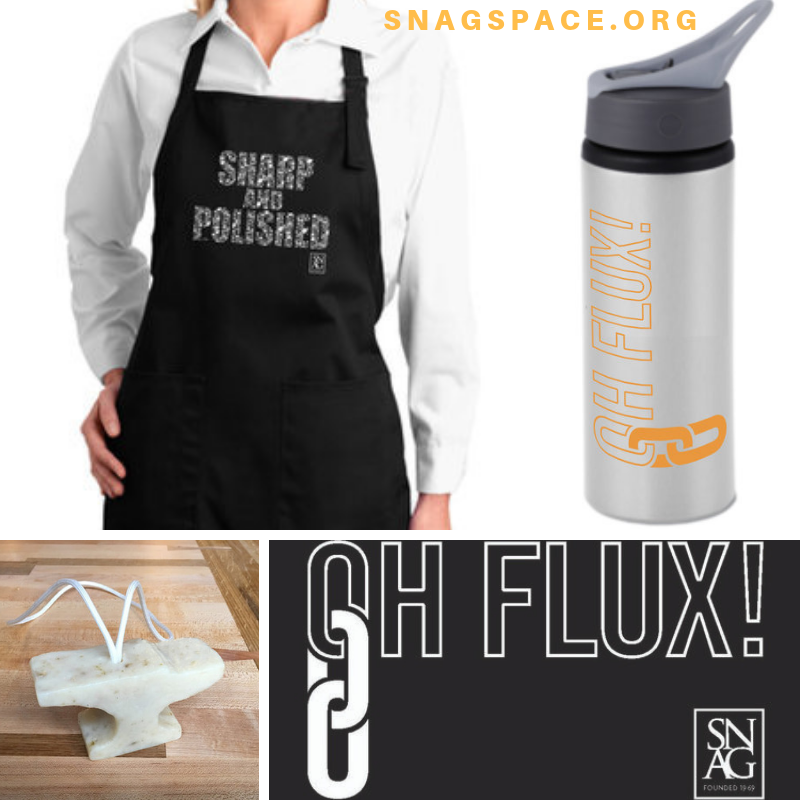 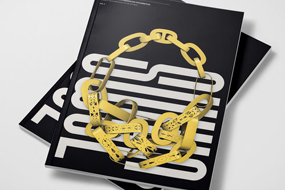 Letter from the President – November 2018 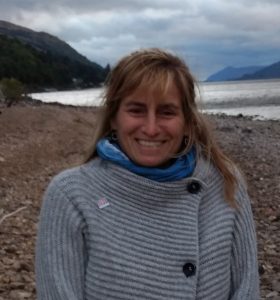 I hope you all are having a great start to fall and that this finds you getting geared up for the holiday season.

In October, the board had its annual fall face-to-face meeting at Arrowmont, where we worked on SNAG’s next Strategic Plan, and of course getting geared up for SNAG’S 50th Anniversaries over the next two years — when we will celebrating the founding of the organization in 2019, and the anniversary of our first conference in 2020.

So with that I want to first say many, many thanks to each and every one of you who participated in the 219 for 220 initiative!! Your generosity is wholeheartedly appreciated and all the funds will directly benefit our celebrations over the next two years.

I would like to reiterate that the significance of reaching 50 years is a huge milestone. This organization is a community that you created, it quite literally is a safe-haven for like-minded people who are generous, thoughtful, inclusive and supportive of all creative activities. And you can help SNAG continue to be a strong organization, by investing in your community before the end of the year.

As we approach the holiday season, it is the time when we will be reaching out to the entire membership with our Annual Appeal. So please reflect on what SNAG means to you — how it has benefited you personally through its events, resources, and overall comradery of the membership. And when you think of these things in addition to all the other things SNAG provides, please be generous in your giving — in whatever amount you can — to an organization that only exists because of your support.

Over the past 50 years, SNAG has helped forge a path, building the community of contemporary jewelry and metalsmithing that exists today. Our organization has created the framework that forms our international community and we want to continue bringing our traditions into the future. Your gift will allow us to continue do this. Thank you.

Again, I hope you are all enjoying the fall and being productive in all your creative endeavors. 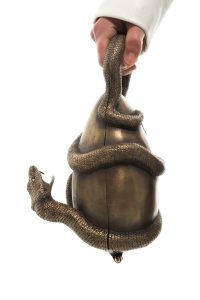 SNAG is pleased to be a sponsor of Uneasy Beauty: Discomfort in Contemporary Adornment, on view through April 21, 2019 at Fuller Craft Museum, Brockton, MA. It brings together 75 examples of contemporary jewelry and costume that demonstrate the power of adornment to impact us physically, emotionally, and intellectually. Curated by Suzanne Ramljak, former editor of Metalsmith magazine. (at right: Leah Aripotch, Snake Bag) Learn more 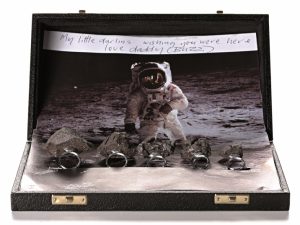 SNAG is pleased to be a supporter of Fake News and True Love: Fourteen Stories by Robert Baines, on view at the Museum of Arts and Design, NYC through March 3, 2019. The Australian artist explores the issue of fake news through the lens of jewelry. Learn more 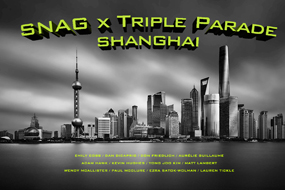 SNAG is pleased to be a sponsor of Triple Parade at the HOW Art Museum in Shanghai, China through January 6, 2019. Includes 12 SNAG members. Learn more

CAST: Art and Objects Made Using Humanity’s Most Transformational Process, a book by Jen Townsend and Renée Zettle-Sterling, will have an exhibition at Wayne Art Center, December 8, 2018-January 26, 2019. The show will include 86 artists from the book, including many SNAG members. CAST also recently won in the Art category of the Best Book Awards.

Tom Herman and Patsy Croft have created a Mendocino Poppy brooch which will be auctioned at Sotheby’s “Magnificent Jewels” in April 2019. Proceeds will benefit the Mendocino Art Center. Learn more Boris Bally completed Converging Ripples, his largest work to date, for the facade of the Jewish Community Center of Omaha. It is made from upcycled traffic signs, machined aluminum, anodized, stainless steel hardware and cable. In addition, one of his Transit Chairs was acquired by the Saint Louis Art Museum. For 46 years Karen Lorene has been curating heirlooms and modern jewelry art. Facèré, the iconic gallery she opened in Seattle’s City Centre building in 1992, will move in January 2019 to the studios of Green Lake Jewelry Works in Bellevue and north Seattle. Pittsburgh International Airport is featuring work through November 30th from the Allegheny Metals Club in their transit level art cases. Some of the artists in the exhibition include: Jim Bove (at right), Cappy Counard, Brian Ferrell, Adrienne Grafton, Joshua Kosker, Sharon Massey, and Stacy Rodgers.

Elizabeth Shypertt is the guest curator for the exhibition “Tex Gieling: Sixty Years” on view at the Museum of Craft and Design in San Francisco through February 24, 2019. Tex Gieling is the founder of the metal arts departments at the University of California, Berkeley and San Francisco State University. Primarily known for her work in sterling silver, Gieling often incorporates gold, pearls, semi-precious and precious stones into her designs. Dawna Gillespie, a metalsmith in Lubbock, TX, will be the “Designer Collection” in the Winter 2019 issue of Belle Armoire Jewelry, to be released in December 2018. Gillespie hand-fabricates copper and brass wearable artwork. Susan Coddon’s entry Shuhaidai-Sake Serving Tray has been selected for inclusion in the 2018 Itami International Craft Exhibition. The exhibition is being held in Itami, Japan November 17-December 23, 2018.  The theme this year is sake-ware.

SNAG would like to take this opportunity to recognize our Corporate Members for their support: Gemological Institute of America, Halstead, and Shapeways. 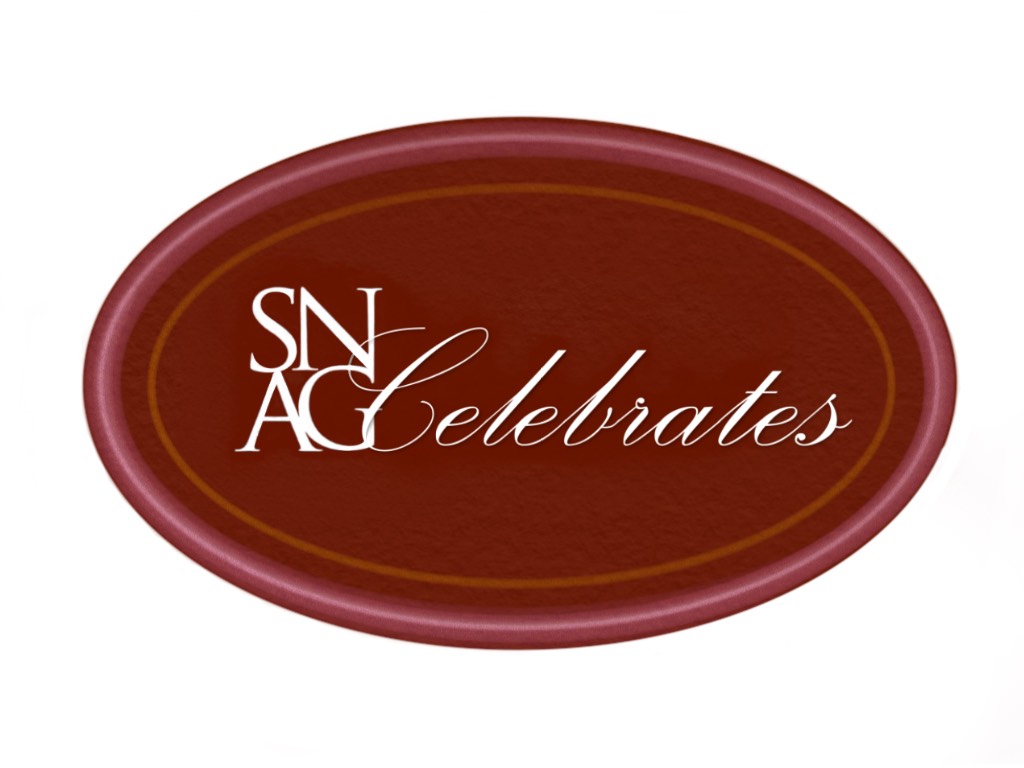 SNAG will be celebrating its 50th Anniversary in 2019 and would like to honor its diverse membership by highlighting a different artist each month in a dedicative blog post. In addition, a SNAG Celebrates banner with the artist’s name will be displayed on our homepage for the duration of the month. Selected members will be notified via email and asked to submit hi-res images of 3-5 works, artist statement and bio (links to online presences and portfolios also accepted.)

NOMINATION PROCESS
The purpose of this series is to celebrate how much our community has grown over the past 50 years and how metalsmithing has evolved since the time of SNAG’s conception. To emphasize this sense of community, we would like to call upon our members to nominate fellow artists that they feel deserve this recognition.  We are looking for artists that represent the broad range and innovation of work being created by our membership.

To nominate, please email sfedoroff@snagmetalsmith.org with the following information: