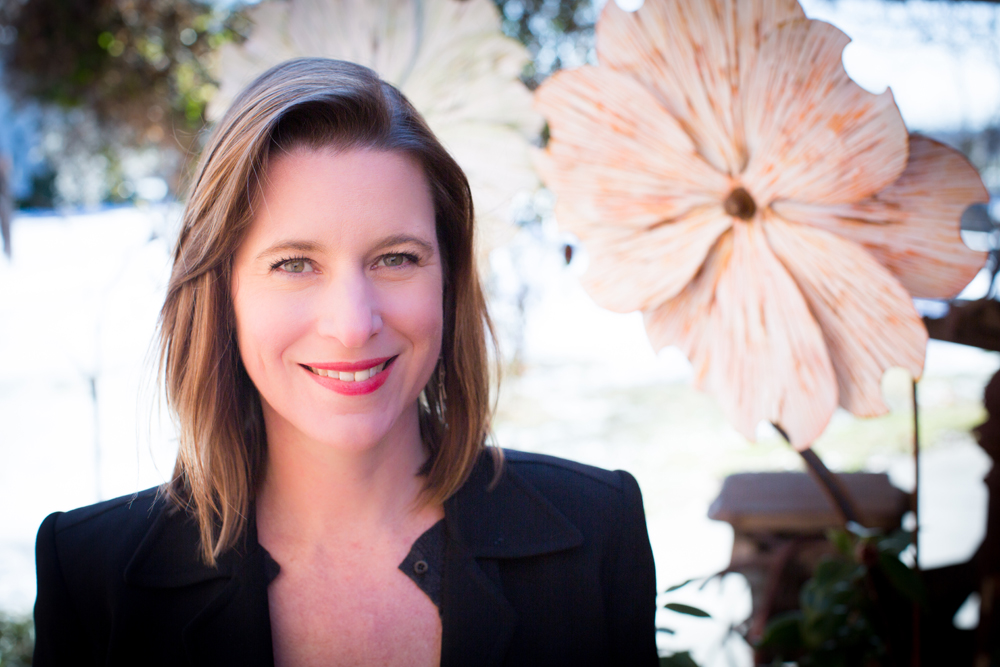 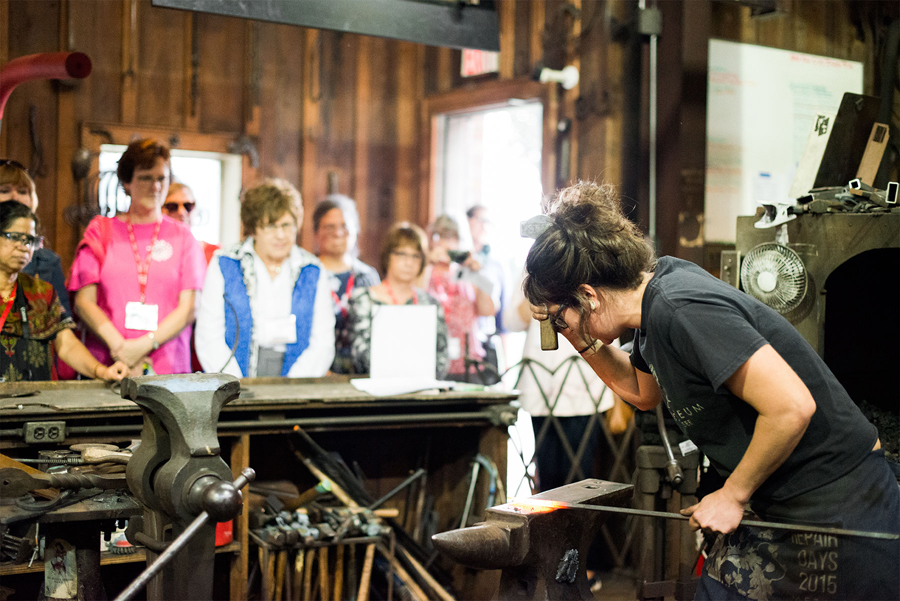 How did you begin working for the Metal Museum? Can you tell our membership about what your position entails and what the goals of the Metal Museum are?
I had been at the UrbanArt Commission for ten years and was tired of the politics of public art. I also wanted to get back into the museum world and thought the Metal Museum might be a good fit. I was particularly excited about working on the other side of the public art equation and knew I could help the staff pursue larger commissions. 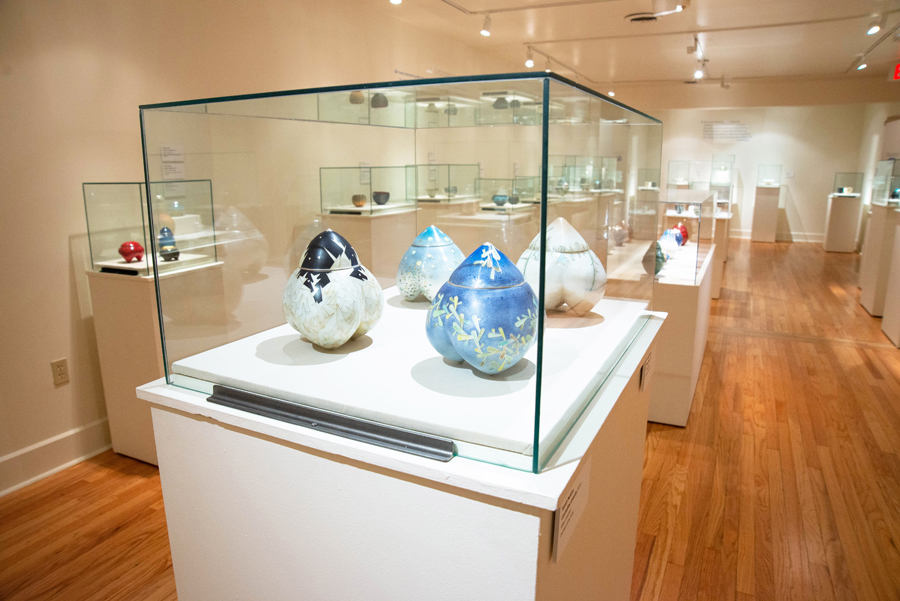 Fortunately, I was a bit naïve and did not realize what I was undertaking.  Following a beloved founding director (who led the Museum for nearly 30 years) is tricky to navigate and the culture of the Metal Museum was strong and fully ingrained. Small changes felt like major events and everyone — from the board of trustees, to the staff, to all of the artists and patrons who had been part of the Museum since its inception — were watching me closely. We still occasionally reminisce about the “old days,” but changes needed to happen to make sure that the Museum would continue to thrive beyond the sheer will of the founding director — or of anyone else who followed.

My job has changed over the years, but I still do a little bit of everything (except metalsmithing) to achieve the Museum’s mission to preserve, promote, and advance the art and craft of fine metalwork. As the director, I am heavily involved in fundraising, Human Resources, policy, and finance. I work closely with the board of directors and donors and oversee all aspects of the Museum, which means I have to rely on the expertise of others on staff. I also have to be a face for the organization, which entails a lot of public speaking about the Museum’s various programs. Over the past several years, the Museum has made a commitment to growing the number and type of educational programs that we are able to offer to artists of all ages and skill levels. In addition to this goal, the Museum has also set goals around increasing excellence in exhibitions and diversifying the type of commissions that come into the Metalworking Facilities.

What projects are you working on currently that really excite you?
Over the past decade, the Metal Museum has seen tremendous growth in all program areas, most notably in its exhibitions and educational programming. While this growth has brought increased recognition and support, it also has resulted in the Museum outgrowing its current facilities, which were once part of a Merchant Marine Hospital complex. For the past few years, the Museum has been exploring expansion options that will meet the needs of a Museum, as well as a blacksmith shop, foundry, and small metals studio. 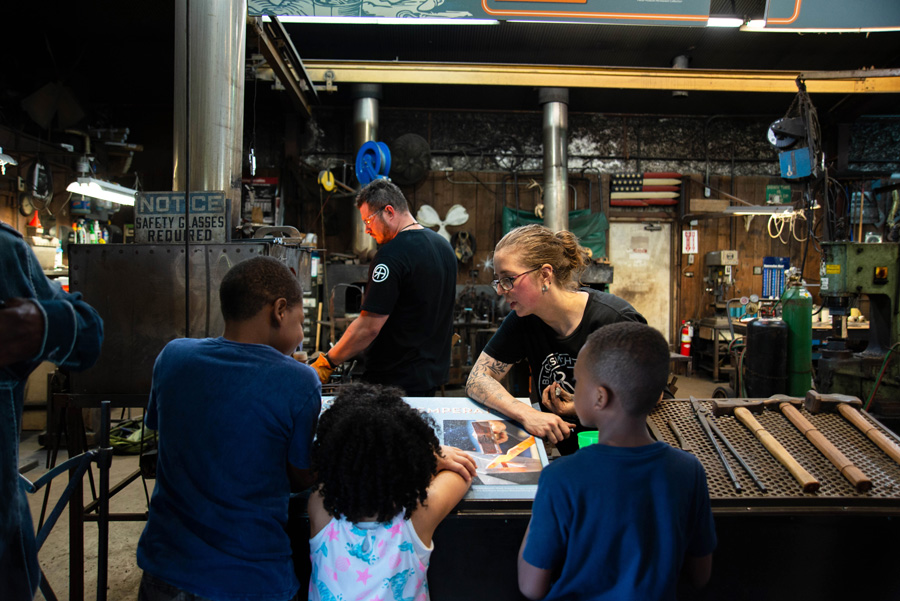 Blacksmithing apprentice Elizabeth Belz speaks to a group of children about blacksmithing in the shop during an after-hours event. Photo courtesy of the Metal Museum.

Right now, the Museum is currently pursuing an opportunity to expand most of its operations into an existing facility in a large urban park in the heart of the City, resulting in two campuses. One would house exhibitions, the Metalworking Facilities, community education, and collections, while the other would become a traditional artist-in-residency program with fully equipped studios, on-site housing, a sculpture garden, and a sales gallery. This proposed expansion would allow us to triple our gallery spaces and metalworking facilities, add dedicated classrooms, and increase collections storage, while providing increased accessibility and visibility to all of our programs.

In tripling our gallery spaces, we will be able to dedicate a gallery to contemporary art jewelry, something that we have never been able to do in our forty-year history. We believe this, along with more jewelry and small metals studio spaces and workshops, will greatly expand our audience, allowing us to reach more people interested in learning jewelry-making techniques and expand the artists we are serving through our programs. We will also be able to add several small metals studios to our residency program, as well as curatorial residencies for research and exhibition development. 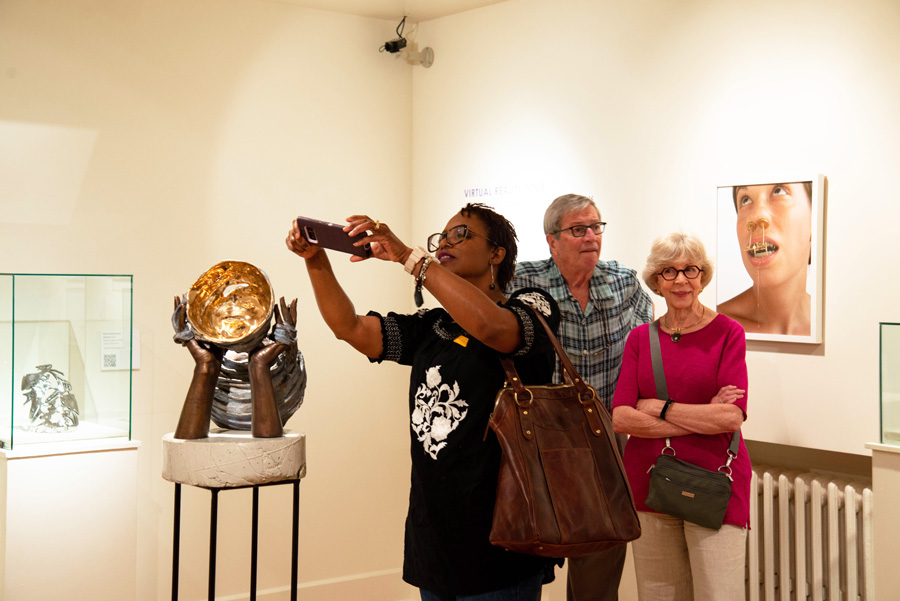 Visitors enjoy the artwork on display during 40 Under 40: The Next Generation of American Metal Artists. Photo courtesy of the Metal Museum.

How has the field of metalsmithing and jewelry evolved since you began your career?
Reality TV has certainly wormed its way into the field in both positive and negative ways. And just as reality TV has changed how people view metalsmithing, in particular bladesmithing, current cultural trends are having a significant impact on how metalsmiths work, what they make and how they see the world around them. For the Metal Museum this has meant being much more intentional in our commitment to representing diversity in our exhibitions and collections — and to developing programs that welcome audiences who may have been unintentionally excluded or overlooked in the past. Blacksmithing and iron casting, traditionally thought of as fields dominated by white men, are becoming increasingly diverse — and it is exciting to see younger artists who are creating spaces for more inclusive practices. I believe climate change will become increasingly important, as more metalsmiths grapple with how their practice impacts the environment. There has also been renewed interest in vocational training, particularly welding and machining, which is creating new opportunities for partnerships and providing non-traditional paths into the arts. 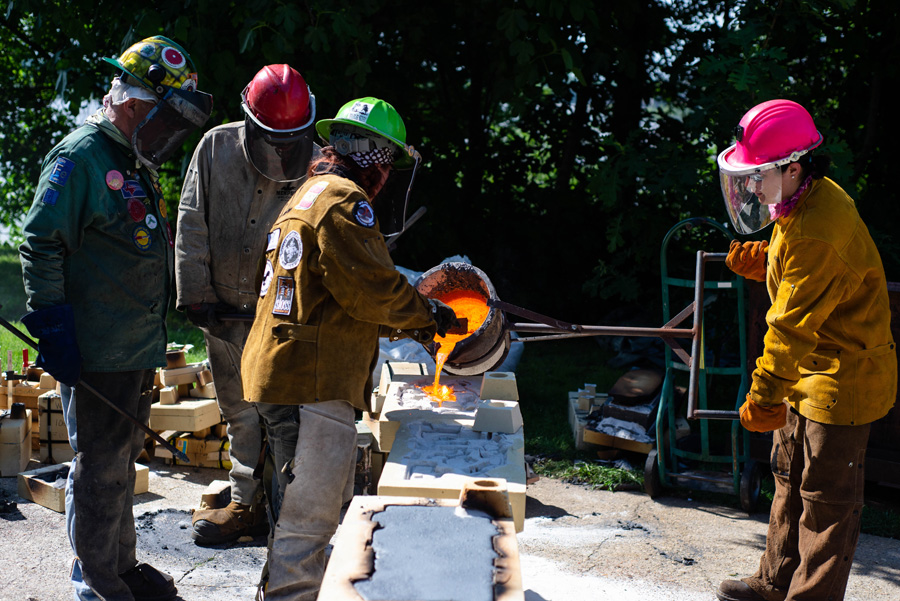 What are your plans for the future? Is there anything specific that you hope to accomplish in the next year?
In addition to the expansion, the Museum remains committed to promoting critical dialog through exhibitions and other education offerings, such as classes and workshops. We have recently scaled back on the number of exhibits we present each year so we can dedicate more time and resources to research, developing supporting materials and to presentation, including digital components that allow for a greater understanding of technique and conceptual influences. We are also pursuing more opportunities to bring national and international artists to the Museum to teach advanced workshops and generate cross-cultural dialog.

Personally, I would like to find time to take more classes at the Museum. I am always surprised by what can be accomplished in a short time (with a lot of help and guidance), but more importantly, I enjoy learning from artists who have much more knowledge and expertise in their fields than I could ever hope to have in mine.

Learn more about the Metal Museum