The fifth juried member online exhibition in the We Are SNAG Membership Series. 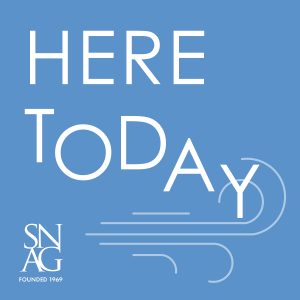 When considering the temporal qualities of metalwork, it is often its endurance over time that comes to mind. Jewelry is passed from one generation to the next, is tied to memory and intimacy, and historically, the stability, durability, and preciousness of its materials added value to its composition. With the Studio Craft movement coming to the fore in the 1950s, the correlation between value and material was subverted, and the possibilities of expression in the field expanded dramatically. This exhibition seeks to explore the notion of “ephemerality” in its widest definition, showcasing work that explores transience, is comprised of impermanent materials, incorporates memorabilia and “ephemera,” and/or exists through time-based performance and photography.

This iteration of We Are SNAG comes at a pivotal marker in the institution’s history, its 50th anniversary.

Kathryn Hall is Curator at Houston Center for Contemporary Craft in Houston, Texas, where she is responsible for developing and overseeing HCCC’s exhibitions and related programming. She previously served as the Windgate Curatorial Fellow at HCCC from 2012 to 2015. Kathryn received a BA in Art History from Wofford College and an MA in Art History from the University of Georgia. Some recent exhibitions that she has curated include: Light Charmer: Bending Neon and Plasma (2018), Annie Evelyn: Multiple Impressions (2017), United by Hand: Work and Service by Drew Cameron, Alicia Dietz, and Ehren Tool  (2017), Charlotte Potter: Glass Armory (2016), and Dining and Discourse: A Discussion in Three Courses (2015). She is a scholar of contemporary craft and material culture and has contributed to Metalsmith magazine, Studio Potter magazine, and most recently juried the Surface Design Association’s Exhibition in Print, Future Fabrication (2017) with Richard Elliott. Kathryn currently serves on the ClayHouston board, an organization that supports ceramic artists working in Houston and the surrounding area. (photo: Scott Cartwright)

Sarah Darro is a curator and writer who has worked in arts institutions across the United States, in Italy, and in the United Kingdom. She is currently the Windgate Foundation Curatorial Fellow at Houston Center for Contemporary Craft, where she has curated projects including; Treachery of Material: The Surrealist Impulse In Craft (2018), The Sound of Things (2017), BEST IF USED BY (2016), Head Gear (2017), and Pocket Museum (2017). Her exhibitions have been featured in publications such as American Craft, Condé Nast Traveler, UrbanGlass Quarterly, Food Network Magazine, Selvedge Magazine, and Arts + Culture Texas. Sarah holds a Master’s degree in visual, material, and museum anthropology from Oxford University and Bachelor’s degrees in art history and anthropology from Barnard College of Columbia University. Her research interests include artist communities and collectives, relational aesthetics, and the life histories and agency of objects.

Do you have a topic for the next WE ARE SNAG online exhibition? We’d love to hear it! Email us