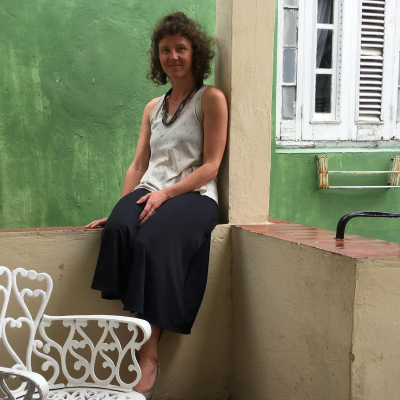 A field of grass is just a field of grass; yet, in a breezy afternoon, when the sun shines through bright white clouds, it is alive and a part of me, and a part of you.  My art meets the abstract with a formalism guided by an appreciation for nature, figure (botanical, entomological, and mammalian), the balance of light and shadows, the feminine, ritual, and the act of gathering rooted in shared evolutionary histories.  With paint, raw pigments, ink, paper, pencils, and honey I create textured stories as jumping off places for these conversations.  Outside of painting and illustration, I make jewelry through the lost wax method.  This process begins with drawing three-dimensionally in melted wax, layering line atop of line to form sculptural adornment.  My approach to painting and illustration is informed by this process and its results.  The wax is fluid when heated, if forced, it crumbles, when guided with attentive care, it creates gorgeous, organic lines.  Mirroring the movement of the wax and the composition of these intimate pieces, my paintings and illustrations grow from the collections of my senses and intuition.

Crystal Hartman is an artist and jeweler creating abstract botanical imagery and adornment rooted in storytelling and line.  Born in Durango Colorado, she grew up cutting and setting stones behind the bench at Durango Silver Company.  Hartman received her BFA for Printmaking from the University of Colorado at Boulder, focusing on Intaglio Etching.  She studied Femininity in Argentina and filmed for Null Skateboards in Barcelona Spain where her artwork was featured in the exhibition United BAC! at the CCCB, Center for Contemporary Culture Barcelona.  After studying contemporary craft in Chiang Mai Thailand, she returned to the States as a Signature Member of the National Watercolor Society, receiving the Merwin Altfeld Memorial Award for Storytelling in the Arts.  Founder and Director of Durango Open Studio, an event celebrating and sharing lifestyles and process in the arts, Hartman is inspired by history and conversation.  She collaborates with writers and journals creating visual representations as poetry reviews.  Working predominately in Lost Wax Casting, her sculptural jewelry has been  featured in Art Jewelry Magazine and included in exhibitions such as TOP Jewels: International Jewelry Exhibition at the Durango Arts Center and Earthly Delights: Metalsmiths Inspired by Nature at the Lillstreet Gallery, Chicago, IL.  Her artwork has been shown at locations such as The National Palace of Culture, Sofia Bulgaria, the Boulder Museum of Contemporary Art, Colorado USA and can be found at select galleries and boutiques across the US.  Her writing and visual poetry can be found in Art Jewelry Magazine, CutBank Literary Journal and Interrupture Magazine, and through Open Country Press.