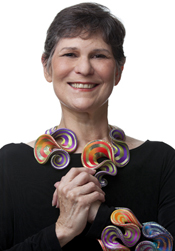 We are sorry to hear that former SNAG member Elise Winters passed away on January 1, 2019 after a long struggle with cancer. Winters, recognized as one of the nation’s leading polymer artists and jewelry designers, grew up in Rochester, New York. Her formal education includes an initial arts degree from Syracuse University, and advanced degrees from Montclair and the New School Universities.

Her life as an art professional began in the 1970s with work as a potter and then turned to photography. Time spent in Japan allowed her to enrich her understanding of both ceramics and sumi-e brush painting. The Japanese influence, in both its reverence for nature and its respect for subtlety of design, has informed her work with luminous polymer clay jewelry. 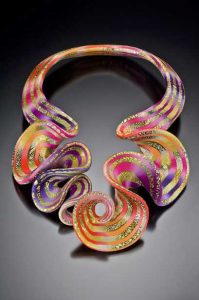 Winters’ work can be found in the permanent collections of 6 major museums. She and her work have been featured in more than a dozen of the most widely selling books on polymer art and in numerous arts magazines, the most recent being the Oct/Nov 2011 issue of American Craft magazine. and the June 2012 issue of Metalsmith magazine. An artist profile also appears in the Spring 2009 issue of Ornament magazine.

Information and images taken from www.elisewinters.com ; photo of artist by Barbara Bordnick.